Hello, hello! August has been a craaaazy month so far, and yes I’ve been quite a hermit lately. BUT, I’m popping out of my hole to join in on The Boundless Sublime blog tour, hosted by Allen & Unwin! As part of this tour, I’ve had the pleasure of interviewing the author, Lili Wilkinson, on all things sublime. 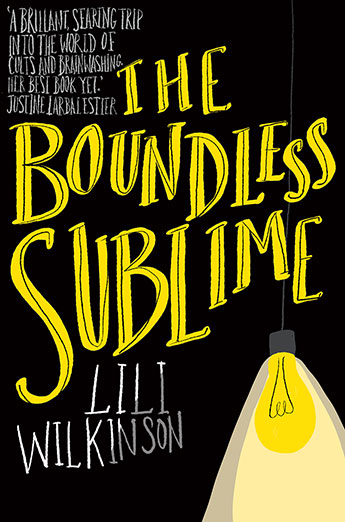 Ruby Jane Galbraith is an ordinary girl seeking peace in the wake of family tragedy. Her search leads her into a community that seems guided by love. And it’s only after she’s drawn into its web that she learns its sinister secrets.

Ruby Jane Galbraith is empty. Her family has been torn apart and it’s all her fault.

The only thing that makes sense to her is Fox – a gentle new friend who is wise, soulful and clever, yet oddly naive about the ways of the world. He understands what she’s going through and he offers her a chance to find peace. Fox belongs to a group called the Institute of the Boundless Sublime – and Ruby can’t stay away from him. So she is also drawn into what she discovers is a terrifying, secretive community that is far from the ideal world she expected.

Can Ruby find the courage to escape? Is there any way she can save Fox too? And is there ever an escape from the far-reaching influence of the Institute of the Boundless Sublime?

A gripping YA novel about an ordinary girl who is seduced into a modern-day cult.

1. Can you tell me a little about The Boundless Sublime in three sentences or less?

It’s about Ruby, a girl whose family has been torn apart by tragedy and grief. She’s looking for a path out of the darkness, and she thinks she might find it with soulful Fox and his strange community – the Institute of the Boundless Sublime. She’s wrong.

2. What about cults and sects drew you to write Ruby’s story in The Boundless Sublime?

I’ve always been really interested in the idea of belief. My parents aren’t religious, but my grandparents were Scientologists, so I grew up not in, but adjacent to, some pretty strange beliefs. I loved Robin Klein’s People Might Hear You as a child, and have always been drawn to stories about the intersection between power, belief and control. In 2014 I read Lawrence Wright’s Going Clear, and that led me down a research rabbit hole that I’m only just starting to emerge from!

3. I’ve seen a lot of news articles about cults lately (eg. The Family, from Melbourne), with various beliefs and motivations that led to the forming of the cult. What helped you determine the motivation and beliefs behind ‘The Institute of the Sublime’?

A lot of it is drawn from real world cults and new religious movements – the dietary stuff, the idea that Zosimon is thousands of years old, the treatment of the Monkeys etc. But almost all the organisations I looked into had a leader who declared him or herself the second coming of Christ, and I wanted to stay away from real-world religions. I’d also been reading a lot about pseudoscience and alternative therapies etc, and noticing a lot of resonances between the behaviour of some cults and, say, the behaviour of militant anti-vaxxers. So I added in a bunch of pseudoscience, and threw in the alchemy stuff just for fun.

4. What is one message you want readers to take away after finishing this book?

If anyone claims to have all the answers you seek, be suspicious.

5. Who do you envisage as the perfect Ruby and Fox, if The Boundless Sublime is optioned for film?

Alycia Debnam-Carey as Ruby, who plays Lexa on The 100. She’s got just the right amount of toughness and vulnerability. And Charlie Heaton as Fox (most recently seen playing Jonathan Byers in Stranger Things). Fox was inspired by River Phoenix (who was also raised in a cult), and I think they look really similar (I’m not the only one). Plus Charlie Heaton was born the same year River Phoenix died! Spooky.

Thanks for sharing some insights into your new book with us, Lili!

The Boundless Sublime by Lili Wilkinson is published by Allen & Unwin, RRP $19.99.

Lili Wilkinson is the award-winning author of ten YA novels, includingScatterheart, Pink and Green Valentine. After studying Creative Arts at the University of Melbourne, Lili established the insideadog.com.au, the Inky Awards and the Inkys Creative Reading Prize at the Centre for Youth Literature, State Library of Victoria. She has a PhD in Creative Writing, and lives in Melbourne with her husband, son, dog and three chickens.