Hey guys, Justin Woolley, the author of The Territory Series joins me on the blog today to answer a very important question that I posed to him:

If the characters from A Town Called Dust could be picked up and placed in another book or setting what would it be?

That’s an interesting question, and not really something I’ve considered before. I mean I’ve spent so long with these characters now, in the world of the Territory, that it’s difficult to imagine them anywhere else. I think the best characters in fiction are shaped by the setting in which they live in such a way that you almost can’t picture them outside of that time and place.

Can you imagine Huckleberry Finn living anywhere but on the Mississippi River? Squid, Lynn, the Administrator, the High Priestess, they are all products of living in the harsh environment of the Territory. Their motivations and goals are intrinsically linked to where they live and the situations they must overcome because of this. So my first reaction is that these characters are inseparable from the world I created. However, because that’s not a really great answer, I’ll pluck them out and place them somewhere else anyway.

The first book that sprung to mind was The Hunger Games. I don’t know what that says about me as an author when I want all the characters from my book to end up in an enormous arena in an epic fight to the death but that’s what I’ll pick. Some of the most famous writing advice is about making life difficult for your characters, plus there’s the old adage ‘kill your darlings’ which doesn’t exactly mean make them fight to the death but there you have it, great drama happens when your characters face the toughest of challenges.

If the characters from A Town Called Dust were sent into the Hunger Games, and let’s say not just the teenagers but all the major characters in the book, I think it would be quite an entertaining event for those watching in the Capitol. The odds on favourite to win would probably be Melbourne. He’d be picking up all the sponsors. He’s the Academy’s greatest graduate and most promising Digger in the whole army after all. Fast, strong, skilled, he has everything you’d need to win the Hunger Games.

However, as the author of these characters (which means they do whatever I want after all) I’d say the winner would be Lynn. Nobody in A Town Called Dust, not even Squid, has the will to compete and win that Lynn does. She’s been trying to prove herself against the limitations the world of the Territory places on her since she could first swing a rattle and pretend it was a sword. I think she’d find a way to walk out of that place the victor.

I’d like to note here however, that Lynn would never kill Squid, they’d have to find some kind of joint victor thing and share some poison berries or whatever because those two are besties. Put Lynn up against Katniss however and I’d put my money on Lynn.

That is definitely a very big call! Lynn sounds like a badass, and if she can win against Katniss, then she’s definitely a heroine that we should all watch out for! What do you think? Is there a character that you think could beat Katniss in the arena?

The second book in The Territory Series, A City Called Smoke, is out now. Check out Alana’s review of A Town Called Dust to find out what she liked about the book! 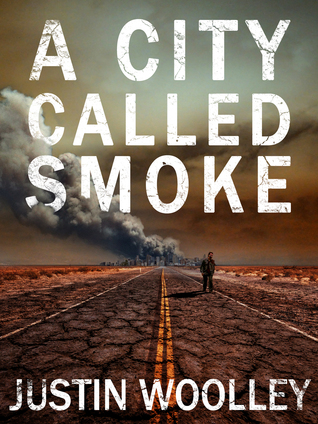 Synopsis: “The battle was only the beginning; the real danger is beyond the fence …

The Diggers have been destroyed, a horde of ghouls is moving inland and the High Priestess has seized control of the Central Territory. Together with Nim, a Nomad boy seeking vengeance against the ghouls, Squid and Lynn begin their long journey toward the city of Big Smoke, a city that may not even exist.

Pursued by forces that wish to see them fail, facing threats on all sides and conflict from within, Squid, Lynn and Nim search for a weapon against the ghouls. It is a search that will lead them into forbidden lands where long-held beliefs about their world are tested and Squid may finally unravel the truth of his identity.

But even if they survive their journey, the teenagers on whom the fate of the Territory now rests have no idea what dangers await them beyond the fence.”