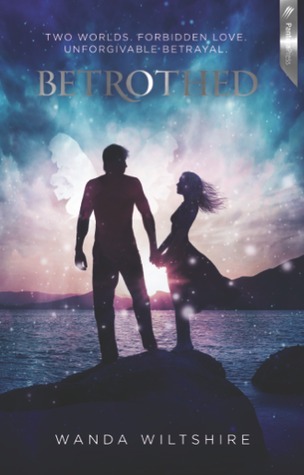 Synopsis: “Amy Smith has always known she was different. Severe allergies, fragile health and taunts at school have made life an endurance test for the adopted seventeen year old.

When Amy starts having strange dreams, everything changes. Night after night, she becomes trapped in a shroud of black – a void of silence but for a male voice calling for a girl named ‘Marla’.

One night, the darkness clears, Leif is revealed and Amy discovers that she is the girl he has been searching for.
Immediately the two are swept up in a passionate yet forbidden love. Leif isn’t like the other boys Amy knows. Breathtakingly gorgeous, he speaks with her telepathically … not to mention, he can fly …

Desperate to find a way to be with her, Leif tells Amy of the terrifying threat to his Fae homeland, the danger to the people, and of an unforgivable betrayal to his King. He urges her to seek her true identity…. But Amy is confused… isn’t it all just a dream?” (Taken from Goodreads)

I don’t often DNF books because I believe there’s always an off chance that the story will pick up in the middle. If I do DNF a book, I will always read at least 5-10 chapters to get a real gauge of the story – otherwise how else can I write a balanced and honest review? Unfortunately, Betrothed is my first DNF of the year, as I just couldn’t get into the story at all. It actually started off so well in its prologue, which was full of intrigue and mystery. At that point, I was pretty happy and couldn’t wait to read more. But that was where the fun stopped for me.

Betrothed follows a girl named Amy, who dreams about a faery prince named Leif that she shares a love-connection with. Amy seems to be allergic to everything except the sun, and as an adopted child, she decides to seek out the truth about her birth parents. She soon finds out her birth name is Marla, and the story quickly falls into a romance-driven plot with Amy/Marla continuously pining over Leif.

I was only 14 pages in when it hit me that this book was turning out to be something completely different to what I was expecting. At the 14 page mark, my eye was already twitching because the author was setting the story up to have a love-triangle. Don’t get me wrong, I enjoy my fair share of love-triangles – but at page 14, it was a little too much, too quick.

At that stage, I was becoming weary of the book, being a lot more cautious in what was about to occur. And I had a bad feeling I knew where the plot was going…into romance territory. Once again, I love my fair share of romance, but not when it’s insta (especially when it’s because there’s some imaginary ‘born-for-each-other’ reason), and not when it becomes the only plot of the book. I did manage to read a good 44% of the book, and all that had happened in those 150 pages was Amy/Marla being set up and falling in love with her dream-turned-reality faery prince. All she could think about was Leif this, and Leif that. Finding her real parents was only touched upon a little bit, and after Leif turns up in her world, nothing else really mattered besides how perfect he seems to be.

Leif is a complete Gary-Stu. He is described as perfect in every way, and becomes angry easily when he finds Amy/Marla kissing her boyfriend at the time. Can you blame a girl for kissing someone else when she thinks you’re a figment of her imagination? Jeez. He falls quite flat as a character because he’s just too flawless to be real.

Amy/Marla started off as a very intriguing character, with her allergies and feisty personality. Unfortunately, when she started slut-shaming a girl at school, I lost all respect for her.

“You’d better make that clear at the assembly tomorrow, or we’ll have all the skanks turning up in leather minis and fluffy handcuffs.”

“Amy, you shouldn’t refer to girls as skanks,” Hilary said, her brow creased with disapproval.

“Well, what would you call Simone and Brittany?”

Since when did dressing a certain way make you a skank? I was certainly not impressed by how Amy/Marla behaved here at all.

The thing I enjoyed the most was her relationship with her two friends, Hilary and Jack. However, I can’t exactly pinpoint a certain scene I really liked because they don’t really share all that many memorable scenes together. The only character that seemed realistic was Jack, who rounds out the love-triangle. (At the point I stopped in the book, he seemed to be happy to let her go, so not sure if the triangle remains…)

Plot wise…I don’t think there was one. I kept waiting for this ‘terrifying threat‘ that was supposedly meant to happen from the blurb, but all we get is Leif and Amy/Marla’s romance. And how the people in her life reacts when they’re introduced to a faery.

I shivered as his heat came into me and a little sigh escaped my lips. He laughed at my weakness for him and I couldn’t have cared less. (Betrothed, p. 151)

That was the final sentence I read before deciding I had to put this down. Seriously, he laughed at your weakness for him?! Wow…so romantic. And you couldn’t have cared less? Amy/Marla, do you have any self decency?

Overall, I just couldn’t bring myself to finish this book. I’m a supporter of Aussie authors, and I tried to read as much as I could, but in the end there were too many points that turned this book from an exciting read to a DNF. I really enjoyed that it was set in Sydney suburbs that I know very well, but there was close to no world-building at all.

This was not the book for me, but I’d definitely like to hear other thoughts on it.

Thank you to Pantera Press Australia for sending a copy in exchange for an honest review.