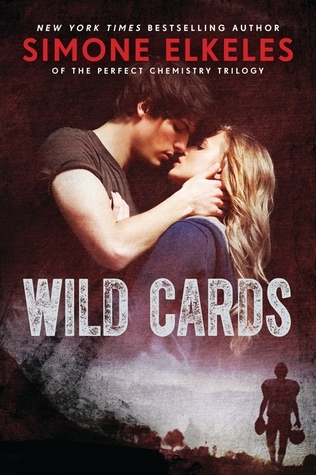 Synopsis: “After getting kicked out of boarding school, bad boy Derek Fitzpatrick has no choice but to live with his ditzy stepmother while his military dad is deployed. Things quickly go from bad to worse when he finds out she plans to move them back to her childhood home in Illinois. Derek’s counting the days before he can be on his own, and the last thing he needs is to get involved with someone else’s family drama.

Ashtyn Parker knows one thing for certain–people you care about leave without a backward glance. A football scholarship would finally give her the chance to leave. So she pours everything into winning a state championship, until her boyfriend and star quarterback betrays them all by joining their rival team. Ashtyn needs a new game plan, but it requires trusting Derek-someone she barely knows, someone born to break the rules. Is she willing to put her heart on the line to try and win it all?” (Taken from Goodreads)

You might see my rating and go, “what the hell, are you crazy?!” but let me try and explain myself. I really did try and like this book, but in the end, I couldn’t kid myself and pretend I liked it at all. I never went into it thinking it’d be great literature, but I did have some expectations as I’ve heard great things about the author’s Perfect Chemistry series. I have yet to start that series (Rules of Attraction is sitting on my TBR shelf) but Elkeles is a NYT bestseller … so I was really looking forward to this book. A lot.

The novel alternates between the perspectives of two characters, Derek Fitzpatrick and Ashtyn Parker, who’ve just learned that they’re now family as Ashtyn’s sister Brandi married Derek’s dad. So to sum it up, Ashtyn is Derek’s step-aunt of the same age. Derek has been kicked out of boarding school for pulling a prank during the senior class graduation, and with no where to go, he moves to Chicago with Brandi and her son while his dad is deployed for work. It’s not until the two meet each other that the cliches start rolling in. The first thought that goes through his mind is that she’s hot…

I turn to find a hot chick about my age with blond hair in one long braid snaking down her chest. She’s blocking the doorway and holding a rusty pitchfork. She looks like she’s ready to stab me to death, which lessons her hotness factor, but not by much. (p. 21)

I don’t know about you but someone with an intention to stab me would not be at the top of my hotties list to be honest. I found myself cringing a lot throughout this novel, especially during the scenes where Derek and Ashtyn are interacting with each other. I felt like they had no chemistry at all, and their relationship was very forced. When I think about it, their attraction to each other is based solely on appearances as they never bother to really get to know each other at all. All they really do is banter and get pissed at each other, and I’m not exactly sure how that would lead to a stable relationship. While their relationship is not insta-love, it can be regarded as insta-pining, a sort of obsession that feels quite awkward and misplaced.

In terms of plot, well, there wasn’t really one at all. You knew from the beginning where these characters would end up, and the rest were just filler pages. I expected a lot more football (was looking forward to it actually as it sounded so intriguing and was an unusual premise) but we only get slight glimpses of it. I had hoped to see more of Ashtyn’s badass personality on the field so it was disappointing that the football was only a background plot to the romance. I was also disappointed that sub-plots were also left hanging without any solid conclusion. These include:

Character wise, most of them were cardboard cutouts from the book of cliche. Bree was the typical slutty cheerleader. Derek was the ‘bad boy’ prankster. Brandi was the ditzy step-parent, and Landon was the standard crappy boyfriend that needed to be there in order for the main girl to reevaluate her decisions in life. I don’t usually mind that characters are underdeveloped if there’s a good plot going, but unfortunately, this book was lacking in both. But the most annoying character was Derek’s grandmother whose actions completely astounded me. And not in a good way. She was portrayed as a snobby Texan upper-class, but it’s hard to believe that when the word ‘nincompoop’ is in her everyday vocabulary. I kid you not:

‘Ma’am, it’s against policy to let you in the elevator without an appointment.’

‘You are obviously a nincompoop when it comes to recognizing authority,’ Elizabeth Worthington barks out, frustration and agitation laced in her voice. (p. 329)

I never expected that the writing style in this book would be that poor either. I felt like I was reading a self-published series on FictionPress, and unfortunately, I’ve read better quality stories on that website (Sarah J. Maas for example). I’m also confused as to why no one bothered to remind Derek and Ashtyn that they’re technically related by law. I once read a very well written series on FP by Myrika regarding the relationship between two step-siblings, and the fact that they’re technically related was a big issue throughout. I was hoping that Wild Cards would have the same amount of drama and intrigue as the FP story, but unfortunately it didn’t.

Unfortunately, this book was not my cup of tea. I hope I’ve explained myself properly regarding my dislike for it and why I’m disappointed by it. It does make me wary of picking up her other series, but I’m not going to say I won’t eventually give it a go. However, I don’t think I will be picking up the next book in the Wild Cards series.