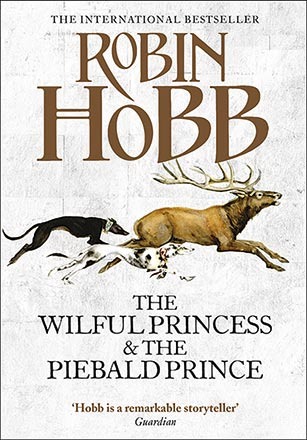 Title: The Wilful Princess & The Piebald Prince (Realms of the Elderlings #0.5)

Synopsis: “One of the darkest legends in the Realm of the Elderlings recounts the tale of the so-called Piebald Prince, a Witted pretender to the throne unseated by the actions of brave nobles so that the Farseer line could continue untainted. Now the truth behind the story is revealed through the account of Felicity, a low-born companion of the Princess Caution at Buckkeep.With Felicity by her side, Caution grows into a headstrong Queen-in-Waiting. But when Caution gives birth to a bastard son who shares the piebald markings of his father’s horse, Felicity is the one who raises him. And as the prince comes to power, political intrigue sparks dangerous whispers about the Wit that will change the kingdom forever…Internationally-bestselling, critically-acclaimed author Robin Hobb takes readers deep into the history behind the Farseer series in this exclusive, new novella, “The Willful Princess and the Piebald Prince.” In her trademark style, Hobb offers a revealing exploration of a family secret still reverberating generations later when assassin FitzChivalry Farseer comes onto the scene. Fans will not want to miss these tantalizing new insights into a much-beloved world and its unforgettable characters” (Taken from Goodreads)

I will admit I bought this book solely for its beautiful cover, and my intrigue about Robin Hobb as an author. I didn’t realise that this was a novella about the history of a much beloved series, and went into the book with no expectations. I left feeling satisfied with my reading experience, and the knowledge that I will need to pick up more Robin Hobb books in the future.

The Wilful Princess & The Piebald Prince (WPPP), is essentially a recount of the history of the Farseer history that has influenced the going-ons of the Realms of the Elderlings series. Written by a low-born servant named Felicity that served both Queen-in-Waiting Caution Farseer and her bastard son Charger, WPPP is a truly beautiful recount of the events that led to the beginnings of the Realms of the Elderlings series.

Split into two parts, Felicity opens up with saying that she’s writing this for Redbird, in order to retain the truth behind the true history of the Farseer lineage. At first we have no idea who Redbird is and why she’s writing the truth yet hiding it, only to be found by people years down the line. But this gets explained shortly as the recount rounds out at the end.

The first part of the book Felicity’s more personalised first-hand recount of growing up with Princess Caution, and how she ended up being so head-strong. The decisions Caution made led her on a path that essentially ruined her reputation as well as tainted the Farseer line of ascendence. For her biggest mistake had cost her her life, and created consequences that lived beyond her death. This mistake brought her a bastard son who everyone called the Piebald Prince, for his body was spotted similar to the horse Caution at bought. Prince Charger’s father was the spotted stud’s stablemaster, and had the gift of ‘Wit’ that bound him to the horse.

This gift was considered remarkable at the opening of the recount, yet as the story went on, we come to see the way the nobles manage to twist the gift into a sign of dark magic. This result, I’ve read, has influenced the way of life in the Realms of the Elderlings series.

I found this book to be a beautiful first-hand recount of the history behind the realm. Not only that, but it contains beautiful illustrations scattered throughout the book that aids with the story. It can definitely be read as a standalone, but I think I would have enjoyed it a lot more if I had read the series first. Highly recommended – I’m going to be purchasing ALL the Robin Hobb books now.