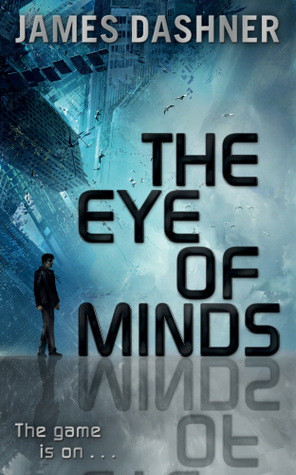 Title: The Eye of Minds (The Mortality Doctrine #1)

Synopsis: “From James Dashner, the author of the New York Times bestselling Maze Runner series, comes an edge-of-your seat adventure. The Eye of Mindsis the first book in The Mortality Doctrine, a series set in a world of hyperadvanced technology, cyberterrorists, and gaming beyond your wildest dreams…and your worst nightmares. For Michael and the other gamers, the VirtNet can make your wildest fantasies become real. And the more hacking skills you have, the more fun. Who wants to play by the rules anyway? But some rules were made for a reason. One gamer has been taking people hostage inside the VirtNet with horrific consequences. The government needs Michael to track down the rogue gamer, but the risk is enormous and the line between game and reality could be blurred forever…” (Taken from Goodreads)

Here’s the thing about Dashner; he always manages to leave you stunned at the end of each book, and it was no different with The Eye of Minds. I’m still reeling from the ending, trying to get my head around it. How did I miss ALL the signs?! One thing Dashner does really well is surprise, and he managed to keep me guessing all the way till the end. Kudos Mr Dashner, kudos.

The Eye of Minds follows Michael and his two best friends, Sarah and Bryson, on an adventure within the VirtNet. It’s basically the future, and virtual reality has become a norm. It’s become so realistic that people can basically live in it.

The novel opens up with Michael trying to stop a girl from suiciding, but what’s changed is that she managed to remove her ‘core’ out, which prevents her from dying and waking up in real life, but really dying. She spills the beans to Michael about being cyber-terrorised by a gamer named Kaine, and being attacked by his ‘KillSims’, which are basically virtual monsters that can sap all your virtual aura and leave your real life body in a coma. Michael is astounded by this news as he’s always known that even if you died in the VirtNet, you would still wake up in your real body with no physical damages (but lots of psychological).

From that moment on, the story moves at an incredibly fast pace as Michael gets recruited by the Virtual Net Security (VNS) to uncover the truth about Kaine, his terrorising ways and The Mortality Doctrine.

Let me just say, Dashner really knows how to torture his characters.

Michael and his friends figure out that there is a ‘path’ that would lead them to Kaine’s lair, but they soon discover that they’ll have to go through hell and back to make it there. And definitely not in one piece either. The opening in the path is within an Adults Only game where gamers turn into crazy savages and goes around massacring everyone around them. Talk about traumatising! To die in multiple horrific ways only to gather up your courage and do it all again in the hopes of continuing VNS’s mission.

I must say I’m very impressed by these characters. Not only are they brave, but they’re resourceful and quick thinking. Sure, this may be the doing of the author, but he tortures them enough, at least he’s decent enough to make them likeable. I loved the character development and the banter going back and forth between Michael and Bryce. The fact that they are only virtual friends don’t deter them from forming such a strong friendship, or for having each others backs at all costs.

I found it weird that Michael was worried about missing school during the start of the novel, but then completely forgot about it. But it makes sense when you get to the ending. Many inconsistencies are tied up…but still, it was mind blowing. Seriously, I still can’t…there are no words to describe what I was feeling when I finished the book.

If you liked Dashner’s The Maze Runner series, then you should definitely check out this new series. It has all the action, develop characters and intricate world building you remember, plus more! Such a great read, go and grab yourself a copy now!

Thank you to Random House Australia for providing an ARC in exchange for an honest review.