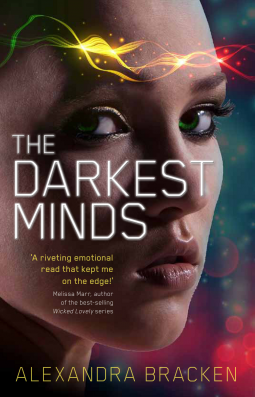 Synopsis: “When Ruby woke up on her tenth birthday, something about her had changed. Something alarming enough to make her parents lock her in the garage and call the police. Something that gets her sent to Thurmond, a brutal government “rehabilitation camp.” She might have survived the mysterious disease that’s killed most of America’s children, but she and the others have emerged with something far worse: frightening abilities they cannot control.

Now sixteen, Ruby is one of the dangerous ones.

When the truth comes out, Ruby barely escapes Thurmond with her life. Now she’s on the run, desperate to find the one safe haven left for kids like her—East River. She joins a group of kids who escaped their own camp. Liam, their brave leader, is falling hard for Ruby. But no matter how much she aches for him, Ruby can’t risk getting close. Not after what happened to her parents.

When they arrive at East River, nothing is as it seems, least of all its mysterious leader. But there are other forces at work, people who will stop at nothing to use Ruby in their fight against the government. Ruby will be faced with a terrible choice, one that may mean giving up her only chance at a life worth living.” (Taken from Goodreads)

The Darkest Minds is about the outbreak of a mysterious disease called IAAN that killed a majority of America’s children whilst leaving the remainder with abilities that scared the government enough to put them in ‘rehabilitation’ camps, which are really nothing more than concentration camps. At the start, we are introduced to Ruby, a 16-year-old who’ve been sent to the camp, Thurmond, by her parents on her 10th birthday. While I found Ruby’s backstory of how she arrived at the camp intriguing, the storytelling was a little choppy as we were suddenly thrust into Ruby’s past without warning. Also, how exactly did this disease come about?

These camps classify their occupants by colour according to their special abilities. I found myself quite lost throughout the majority of the book as I don’t think the abilities of each group were explained properly, you just had to read to understand what they did. I guess Bracken took a ‘show-don’t-tell’ approach, but this got confusing because there was so much being thrown at you at once. (But maybe it was just me, and she did explain it but it completely went over my head? In that case, then it’s my fault for being completely confused.)

Ruby kept her head down throughout her time at Thurmond by pretending to be a Green (someone with intelligent mental capabilities) – but in fact, she is really an Orange (someone with the ability to control minds). While I found the pacing of the beginning to be quite slow, I enjoyed it because it was really fascinating learning about Thurmond and Ruby’s time there. The camp was horrifying. Adults (known as psi officers) walked around with rifles and abused children left and right. It was just horrible to read about Ruby’s time there, so props to Bracken for creating such a creepy environment encased in this horrendous atmosphere.

I think what made up the majority of the book was the world-building and character development. Liam, Chubs and Suzume became characters that I loved, and even Ruby grew as a character. Seen as weak and vulnerable to everything at the start of the book, she became stronger and made hard decisions for the benefit of others by the conclusion.

However, I found that the plot was sacrificed for world-building and character development. The beginning and ending was strong and exciting as things actually happened quickly. There was action, there was suspense and I went through those chapters so quick! But the middle fell so flat for me. Aside from a few chases/escapes from the the psi officers and skiptracers (bounty hunters), all that really happens is the characters getting to know each other. I found myself saying that certain scenes could definitely have been cut out/molded together with others to make the journey more exciting. At more than one point, I kept wondering where Bracken was actually taking this story. While I wanted to put the book down halfway through, I gave the story the benefit of the doubt as I saw so much potential in it. It was just not executed as flawlessly as I’d have liked.

One advantage for this slow story building is that the romance didn’t feel forced. I love, love, LOVED it. You could obviously tell from the beginning who that love interest to Ruby would be, but the slow plot made the ‘getting-to-know-you’ phase all the much sweeter. I was definitely rooting for them – which is why the ending REALLY floored me. SO MUCH SO that I cried.

I think what really killed me was finding the playlist Miss. Bracken has made for the book right after I finished reading and was still feeling so vulnerable and emotional. Because of this, the first song on the playlist almost put a dagger through my heart because it was just so perfect and fit the ending so brilliantly.

I think it’s really a song that you need to have read the book to feel extremely emotional about. The rest of the playlist is just brilliant also, it just captures the essence of the novel completely. CLICK HERE FOR ‘THE DARKEST MINDS’ PLAYLIST.

I really thought this book would be a standalone, I think it works well as one for such a thick book – so much so that I was really disappointed to find out that it’s meant to be a trilogy. As the majority of this book was spent on character development, it’s almost as if Bracken held back the plot developments in order to stretch out the story. While I’m not saying that that’s a bad thing as there are still so much left to be resolved, but it almost feels like I can pinpoint what would happen in the next two books.

There was also a lot of inconsistencies in the editing of the book. For example, ‘Rob’s’ name was used before he was even introduced. I think I really noticed that because it was just so abrupt. I’m not sure if it’s because I’m reading an electronic ARC, but I found myself stopped abruptly in the middle of sentences throughout the whole book because words were either missing or misused. This became a really frustrating because it felt so jarring to the overall reading experience.

While I found many problems with this book, I did like it overall. I think Bracken has come up with a very interesting story that could perhaps have worked better as a standalone. The ending was heartbreaking as the characters were developed so well, but I wish it could have just been left off like that – almost as if to say life’s not perfect, deal with it. I will definitely be picking up the next book in the series as I’ve really become invested in these characters, I just hope there is more action now that the world is built and the characters are well-formed!

An electronic ARC was provided to me by HarperCollins Australia for an honest review.