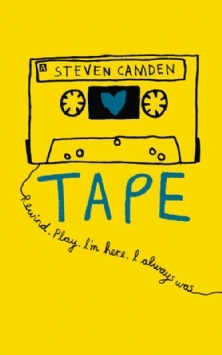 Synopsis: “Record a voice and it lasts forever…

In 1993, Ryan records a diary on an old tape. He talks about his mother’s death, about his dreams, about his love for a new girl at school who doesn’t even know he exists.

In 2013, Ameliah moves in with her grandmother after her parents die. There, she finds a tape in the spare room. A tape with a boy’s voice on it – a voice she can’t quite hear, but which seems to be speaking to her.

Ryan and Ameliah are connected by more than just a tape.

This is their story.” (Taken from Goodreads)

Tape by Steven Camden is a very odd book. Certainly a very different sort of contemporary the further you delve into the novel. The book follows two very normal everyday characters, Ryan and Ameliah, but the catch is – they exist twenty years apart from each other.

Following the death of her parents, Ameliah moves in with her nan and discovers boxes of her mum’s old belongings. One day, she discovers one of those old tapes from the 90s, along with a tape player. She also finds lots of oldie music, but it’s not until she plays that one specific tape that the story starts moving along. Ryan on the other hand, is adapting to the new changes in his life following his mother’s death from cancer and his dad remarrying. His new stepmum moves in with her son Nathan, who finds the new situation as annoying as Ryan does. They certainly do not get along. Ryan finds comfort in recording his thoughts on a tape intended for his mum, but one day, he hears a voice through his tape recorder in the midst of recording.

I prefer the blurb on the back of my book as opposed to the one on goodreads because it just seems a lot sweeter to me.

This novel is certainly a love story, but not the kind you expect it to be. What Camden aimed to do with the novel was explore the myriad of relationships that existed within the two characters’ lives, and how these affect each character. I found this quite powerful, and Camden did a very good job on it. While the plot was pretty much predictable 50 pages into the book, it was still a unique take on contemporary ‘time travel’ (as loosely as it really is on time travelling) stories.

Unfortunately, while I appreciated the beautiful message behind the book, the fact that it took me almost two weeks to read it really is a testimony to how slow the plot moved in the first half of the book. While predictable, there was really nothing else to move the story along. I know I shouldn’t be expecting heart-pumping plot twists, but I had hoped that there would be something exciting that happened.

Not to mention, the characters were all a little flat. Even at the conclusion of the novel, I still fail to picture any of them in my head. Ryan and Ameliah do not spend a lot of time with people at all, and hence their both only really have one friend by their side. But even with so little characters jumping around the book, Camden never really focused on any of the others’ back stories. I would have liked a little more time spent on rounding all the characters out, just to make the book seem more believable.

Tape also does speech within the text very differently. Rather than using speech bubbles, a series of hyphens are used to indicate speech.

I’m not sure why speech is done this way, but I guess it’s probably some kind of english technique most likely used for transcribing speech during 90s. It takes a lot of getting used to as you have to adjust to this unique way of storytelling.

While the story is not amazing, the ending all the more made up for it. The two characters do grow, and become more comfortable with their new lives, and most importantly, they learn to let go of the pass with a little help from both themselves and each other.

You need to soldier through the first half of the novel to get to the good bits, but I think it’s worth it. Tape has a very moving ending that I teared up at, and it ends very nicely. I really liked the novel’s focus on familial love, but overall, Tape was not a book that sticks with you for the rest of your life.

Thank you to Harper Collins Australia for sending me a copy in exchange for an honest review.