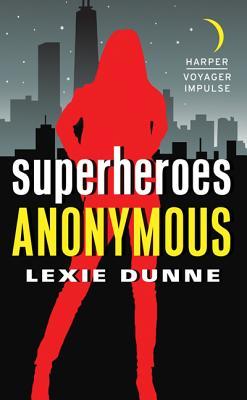 I just HAD to have this book after I found out that one of my favourite fan-fiction writers had gone and gotten herself published, and BOY was it worth it.

Unlike other fan-fiction turned published works, this particular concept and story was not derived from the fan-fiction she had published online. A refreshing and promising tale for future authors who delve into the world of fan-fiction I’m sure!

Superheroes Anonymous revolves around Gail Godwin or ‘Girl’, an ordinary editorial assistant who is as normal as they come. It’s only when town superhero Blaze comes to her rescue one night after a villain attacks, that things REALLY start to get interesting as Gail finds herself the centre of every kind of hostage situation imaginable. And of course, Blaze saves the day every time (over and over and over). But when Blaze leaves for Miami, Gail finds herself kidnapped… but this time there’s no one to rescue her. And when said kidnapper injects her with a radioactive serum, poor Gail just can’t catch a break. If no-one’s there to save her, can she save herself?

I LOVED this novel. I thought it was quite an original concept and I really liked the way that Dunne turned the ‘hostage’ damsel in distress trope on it’s head. There was some really witty banter between the characters (particularly between Gail and any other character she had a scene with) and I really enjoyed the sarcastic humour and dark comedic interactions.

It was just a really FUN and addictive read. A novel that was serious, but not too serious and it was clear Dunne really enjoyed writing it… which in turn made me really enjoy reading it. I read this book so quickly. I just could NOT put it down.

The characters were great! I won’t tell you more about them.. because it spoils quite a large part of the novel if I start naming certain characters…but they were definitely hilarious and unique.

I will say however that the novel felt too short given that numerous things mentioned weren’t properly addressed. I’m assuming (hoping) these will be broached in future sequels, however I was a little disappointed and confused about some aspects… albeit very minor aspects in comparison to the overall storyline.

Also, I felt that we were introduced to a few too many characters. And I was a tad frustrated when we barely got to see some characters for more than a page or two. WHY YOU GOTTA BE LIKE THAT? Especially when I really want to know more about an awesome character!!!

This small frustration could however be attributed to the fact that I’m so used to reading the authors’ 100,000 + word fanfics and  going into real depth will all aspects of the story in lengthy chapters that I can’t quite wrap my head around this condensed story in comparison. Although I understand she would have been restricted to a limited amount of words and pages. Still…  I think it could have been just so much better if it longer. (I think I was just sad to finish it)

I will say that the ending made me MAD. And that’s why I took off a star. It was just so out of nowhere and so WTF and made zero sense. It was SUCH a cruel way to leave it and the fact that the sequel isn’t out till late this year makes me angry. Ms Dunne, you better make this up to me in the sequel!

Unfortunately this title is not currently out in Australia. However, if you have a few spare dollars lying around, I definitely recommend buying the ePub or paperback on The Book Depository. It’s definitely worth it. Or if it’s available in your country in bookstores… lucky you!

I’d definitely recommend this to anyone who is a fan of DC, Marvel and any other comic type media… but I feel like this book could be enjoyed by anyone who likes fantasy, sci-fi and a downright good read. Definitely give it a go!

It’s worth noting that ‘Lexie Dunne’ is a pseudonym. I’m not going to reveal the writers real name on here, because obviously she wrote it under a different name for a reason. However if you’re a fan of Chuck, Castle, Arrow, The 100 and Marvel/Avengers fan-fiction send me a direct message on Twitter and I’ll link you to her (she’s an AMAZING writer).