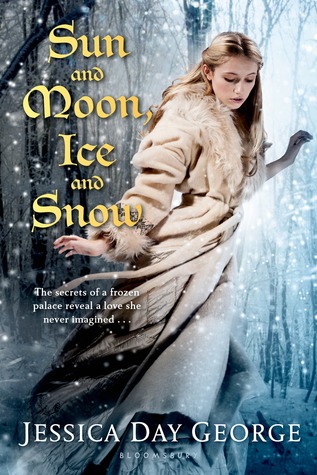 Synopsis: “When a great white bear promises untold riches to her family, the Lass (as she’s known) agrees to go away with him. But the bear is not what he seems, nor is his castle. To unravel the mystery, the Lass sets out on a windswept journey beyond the edge of the world. Based on the Nordic legend East of the Sun, West of the Moon, with romantic echoes ofBeauty and the Beast, this re-imagined story will leave fans of fantasy and fairytale enchanted.” (Taken from Goodreads)

I am a sucker for fairy tale retellings. It’s always fun reading an author’s attempt to change a well-known fairy tale into something of their own, even though the main elements must still be at the forefront of the novel. In saying this, I thought George did a wonderful job in retelling the Norwegian folk lore of East of the Sun and West of the Moon. Having read East by Edith Pattou many years ago, I had a good idea of how this story worked, and how it would end. I had really enjoyed reading East, and was a little concerned that Sun and Moon, Ice and Snow (SMIS) seemed a little too similar. But once again, there are only so many ways to retell the same story, so I put those thoughts aside and read the book as if I was new to the story.

By putting aside the similarities, I was able to really jump into the story and enjoy it. The novel follows a young girl, the ninth child of a village family. Her mother’s disappointment with her being born a girl rather than a boy resulted in her namelessness. Therefore her family only refers to her as pika, which means young girl, or lass as she’s called by her eldest brother Hans Peter.

Lass is such a wonderful character. She does not let her namelessness stop her from being a kind-hearted individual that loves her family. One day, she manages to untangle the mythical white reindeer who was caught in a bunch of shambles and he rewards her with her own name. Not only that, but she soon discovers that she’s now able to communicate with animals!

Coming from a poor family with nine mouths to feed, Lass is a person that would do almost anything to ensure that her family is safe and happy. She’s especially concerned about her brother Hans Peter, who returned from his sea journey like a completely different man. When an isbjorn (great white bear) turns up at her home one day, Lass courageously agrees to go live with him for a year and a day in return for riches for her family.

And so the retelling of the myth begins. The story, while interesting, moves at an incredibly slow pace. A lot of the time during the Lass’s stay at the castle, we only see her wandering about and attempting to solve the mystery of the enchantment that bounds the isbjorn and his servants. While the Lass is brave, she is also a very stubborn girl that continues to seek answers where none is given. She discovers that her brother lived in the palace once and his his change in character was because of it. Seeking her brother’s help, he tells her to just be patient and to just live out the year. But as any stubborn character goes, Lass cannot stop her curiosity, which ends up with very dramatic consequences.

One of the best parts of the novel would have to be the Lass’s relationship with her wolf-pet Rollo. Rollo is the type of pet that would protect his master no matter the situation. I found that bravery believable and true. I loved the dynamic they shared. The relationship I disliked was hers with the isbjorn. As the myth goes (or if you’ve seen Beauty and the Beast), the isbjorn is a prince cursed to be a great white bear for one year by a troll. Lass’s relationship was nothing more than platonic at best, having only conversed with him a few times a day during her stay at the palace. When she discovers that he is in fact a man before the curse is broken, therefore condemning him to marry the troll, the Lass suddenly finds herself in love with him. This insta-love is unbelievable and if it wasn’t a fairy tale retelling, I wouldn’t have bought the way she runs off after the isbjorn to save him.

I would say the novel eventually gets exciting when the Lass finally makes it to the troll’s palace that’s east of the sun and west of the moon. While there, she uses her head to outsmart the trolls and therefore saves the day.

So in terms of plot, the novel moves along very slowly but it does allow for some character development within the Lass. What the novel lacks in is the development of her relationships with anyone other than her brother Hans Peter and her wolf Rollo. I wish her relationship with the isbjorn was more solid, but as a fairy tale retelling, SMIS was still quite enjoyable nonetheless.

Thank you to Bloomsbury Australia for sending me a copy in exchange for an honest review.