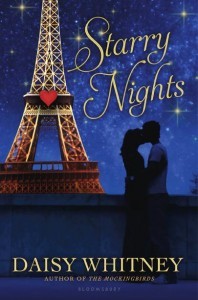 Synopsis: “Seventeen-year-old Julien is a romantic—he loves spending his free time at the museum poring over the great works of the Impressionists. But one night, a peach falls out of a Cezanne, Degas ballerinas dance across the floor, and Julien is not hallucinating.

The art is reacting to a curse that trapped a beautiful girl, Clio, in a painting forever. Julien has a chance to free Clio and he can’t help but fall in love with her. But love is a curse in its own right. And soon paintings begin to bleed and disappear. Together Julien and Clio must save the world’s greatest art . . . at the expense of the greatest love they’ve ever known.

Like a master painter herself, Daisy Whitney brings inordinate talent and ingenuity to this romantic, suspenseful, and sophisticated new novel. A beautifully decorated package makes it a must-own in print.”

As I picked up this book and read the blurb, I was intrigued! I’ve never quite heard of a similar concept and I was really interested to see where this novel would take me! Paintings that come to life? Now that’s wicked cool!

The novel follows Julien, a seventeen year old French boy whose mother works at one of the most famous art museums in the world, the Musée d’Orsay. Julien is fascinated with the beautiful artworks as perhaps no other teenage boy would be. His nightly museum wonderings turn into midnight adventures as the paintings come to life right before his eyes and Julien is left with a startlingly intimate glance at the subjects of the most famous paintings in the world, including that of a beautiful dancer named Clio.

I have to say, this was a rather odd novel to read. The concept itself was incredibly unique and interesting but I just felt the writing was patchy and childish – it could perhaps have been targeted towards a younger audience. Even though the character was meant to be seventeen, the writing style could easily mistake the main character to be thirteen or fifteen.

This really hindered my enjoyment of the novel as I could just not connect with any of the characters and I felt the ‘romance’ between Julien and Clio didn’t really connect with me on any emotional level. I wasn’t rooting for them, I kinda didn’t really care less. I’m not sure if that’s more to do with the fact that from the beginning of the novel the character of Julien is so aloof and disconnected from the reader, perhaps if this was written better I would have felt more for the romance.

I do admire the more mythical direction Whitney chose to take in terms of the paintings coming to life. I found it to be interesting although odd, a sentence I think describes my view of this book perfectly. I feel like the storyline could really have been done justice if it was set in a more medieval and less contemporary time, I could really see that being a story I would read, and prefer. The contemporary setting just felt…odd.

While a beautiful concept, I don’t think it was done justice. There were just so many odd occurrences of unexplained/unnecessary characters or scenes that really did not help with the pacing of the novel and made it a difficult task to finish.

All in all, Starry Nights is a novel I would recommend simply for it’s uniqueness although not a favourite of mine.

Thank you Bloomsbury Australia for providing an ARC in exchange for an honest review.