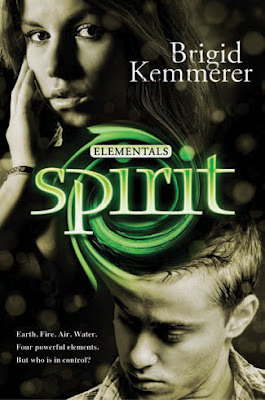 Synopsis: “Hunter Garrity just wants to be left alone. He has learned the hard way that his unusual abilities come at a price. And he can’t seem to afford any allies.

He’s up to his neck in hostiles. His grandfather, spoiling for a fight. The Merrick brothers, who think he ratted them out. Calla, the scheming psycho who wants to use him as bait.

Then there’s Kate Sullivan, the new girl at school. She’s not hostile. She’s bold. Funny. Hot. But she’s got an agenda, too.

With supposedly secret powers rippling to the surface everywhere around him, Hunter knows something ugly is about to go down – which means he’ll have to find someone he can trust.

Spirit is the third book in Brigid Kemmerer’s popular Elementals series. This time ’round, Spirit follows Hunter Garrity as he deals with some horrible family issues as well as the inevitable need to finally choose a side in this battle between Elementals and The Guides. The stakes are being upped for Hunter as Calla Dean threatens to continue setting fires and hurting innocent people in order to call the Guides to them. In a psychotic sort of way, she is actually on the Elementals’ side, but has a different way of sorting out her hatred for the Guides. So in other words, she’s not exactly working alongside the Merricks either.

In this third installment, we finally get a glimpse on what the Guides do and how they came about. The novel raises the question of the reality of good and evil. Nothing is really as it seems, and everyone has their own agendas.

Hunter was a character that I liked in the first book, and I had even been rooting for him a little bit. Unfortunately, his story and perspective really didn’t work for me. I found Hunter to be extremely whiney and his inability to trust anyone got annoying really quickly. After being thrown out of his own house by his grandparents, I felt sorry for Hunter as he struggles with being framed for hurting Calla and having to survive with almost no money at all. But his luck changes when Michael Merrick invites Hunter to stay at their house. Hunter at first reluctantly refuses (which is fair enough due to the history he has with the other Merrick brothers), but once he begins living with them his personality gets all wacky.

Hunter continuously swings back and forth between sides and has no idea who to trust. He wants to live up to his father’s reputation, and being a fifth, he believes he should be helping the Guides take down Calla and her group of fire-starting minions. This of course sounds logical, but once he is forced to choose between trusting the Merricks or ditching them because they were going to pack up and leave without him anyway, Hunter becomes a big puddle of stupidity. He continuously lets the Merricks down by being selfish and thinking only of himself, and I definitely lost count of how many times I rolled my eyes as Hunter went on about whether to trust the Merricks or not. Seriously, dude?! THEY TOOK YOU IN WHEN YOU HAD NO WHERE TO GO.

In Spirit we also meet a new love interest. Kate Sullivan rocks into town, joins the school and Hunter is immediately in insta-love with her. The first time they meet, he stares at her like a creep … and he does it again the second time they meet. And you know what, it actually works out for him because she asks for his number and starts texting him. Yeah … okay. I did not root for Kate and Hunter together at all, I felt they were extremely rushed and there existed absolutely no chemistry between them. What’s annoying is when you realise that the entire book happens within one week, so basically the whole romance occurs within that one week. That also means it was only two or three weeks ago that Hunter was going after Becca in Storm. Man, your feelings change fast!

But to give him credit, the short time span makes sense in regards to Hunter’s inability to choose a side. I guess he is still confused about avenging his dad and doing the right thing by him, or choosing what he thinks is right himself. We can see this contrast played out in Kate’s background story, which I found extremely interesting. Kate herself was not a horrible character, in fact I really liked her. I just don’t think she and Hunter really needed to develop a romance.

What I really enjoyed in Spirit is that the story finally seems to be going somewhere! We get a lot more action, and with the Guides finally arriving on the scene, stuff will finally go down. I’m really excited to start Secret, the next book in the series, just to get some more action.

Overall, Spirit was an enjoyable read. Nothing spectacular and a little too much angst for my liking, but it was still entertaining.