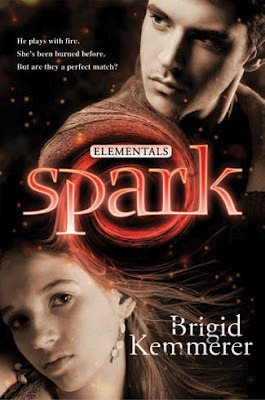 He could feel flames coming through the floor, looking for him. Sparks and ash rained down. He wasn’t going to make it. He was going to fail. Again. Then a hand closed over his wrist and pulled, hard.

Gabriel Merrick plays with fire. Literally. Sometimes he can even control it. And sometimes he can’t. So when an arsonist wreaks havoc on his town all the signs point to Gabriel.

Layne is strangely drawn to him. Layne understands family problems, and she understands secrets. She has a few of her own.

Gabriel can’t let Layne know that the danger that’s right at his heels. But there are some risks he can’t help taking.

THE FUSE IS LIT…” (Taken from Goodreads)

I went into this book with very high expectations because I loved Storm, and I was extremely excited to continue reading about the characters I met in the first book. Unfortunately, Spark and I just had no…spark. HA!

The second book in Kemmerer’s Elementals series follows Gabriel Merrick, the fire brother, and Layne our female protagonist. I don’t know what I was really expecting with this book, but certainly not the amount of angst that was scattered throughout it. There was rarely a moment when one or the other wasn’t complaining about something, and unfortunately it soon became rather annoying. Gabriel’s tendency to piss people off just for the heck of it really grated on my nerves, and he was definitely not a character I enjoyed reading about. Sure, there were points in the story where he redeemed himself, but for most part, I really didn’t like him.

Layne on the other hand was more relatable. She’s a quiet little bookworm with a brother that’s deaf. So you can imagine how hard life was for them at school. I enjoyed her love for horse riding and her dynamic with her brother. She tried her best to make sure that her family didn’t fall apart, and I respect her for that. However, I just didn’t think there was any chemistry between her and Gabriel. Their relationship seemed so haphazard and so quickly thrown together that there wasn’t much to develop from. They became close during a time when Gabriel was at his loneliest, when most of his family was ignoring him. Layne seemed to be the only one he could latch on to. I feel like if he wasn’t in that predicament, they never would have worked out.

Once again I must point out my dislike for the amount of stereotypical cliches Kemmerer uses on her high school characters. I really hated her use of sluttiness to indicate that someone is bad, or her portrayal of rape. In both books she has used rape/sexual assault as a form of plot, and I just find that disgusting. And the fact that these teenagers are going around doing atrocious acts like these with no consequence surely isn’t a good message to be sending to her readers.

While there were many things I disliked about Spark, I did enjoy Gabriel’s heroism. It was refreshing to see him as more than just an angsty teenger hating on the rest of the world for no reason. I really hope to see him become a firefighter in later books in the series because I know he can be a great one.

Although I didn’t really enjoy this novel, I will be reading the next one in the series. I heard the fourth book is amazing, so I definitely want to read on!