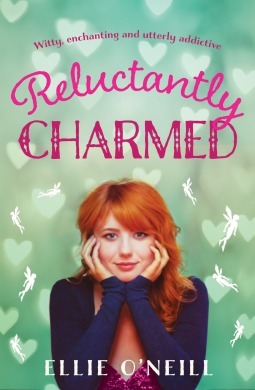 Synopsis: “Kate McDaid is listing her new-year’s resolutions hoping to kick-start her rather stagnant love life and career when she gets some very strange news. To her surprise, she is the sole benefactor of a great great-great-great aunt and self-proclaimed witch also called Kate McDaid, who died over 130 years ago. As if that isn’t strange enough, the will instructs that, in order to receive the inheritance, Kate must publish seven letters, one by one, week by week.

Burning with curiosity, Kate agrees and opens the first letter – and finds that it’s a passionate plea to reconnect with the long-forgotten fairies of Irish folklore. Almost instantaneously, Kate’s life is turned upside down. Her romantic life takes a surprising turn and she is catapulted into the public eye.

As events become stranger and stranger – and she discovers things about herself she’s never known before – Kate must decide whether she can fulfil her great-aunt’s final, devastating request … and whether she can face the consequences if she doesn’t.

Witty, enchanting and utterly addictive, Reluctantly Charmed is about what happens when life in the fast lane collides with the legacy of family, love and its possibilities … and a little bit of magic.” (Taken from Goodreads)

First of all, I know the title is an ‘Adult’ read. And I know us YA bloggers tend to shy away from such books. But this has to be one of the most YA-y ‘Adult’ books I’ve read in a long time. It definitely doesn’t have the normal adult vibe… apart from the fact that yes, the character is a little bit older than a teenager, it’s a quirky and interesting ‘fluffy’ read that’s perfect for a lazy Sunday afternoon.

The novel follows Kate McDaid, a young Irish woman who’s in desperate need of a promotion, a love life and something to take her away from her boring routine. Fortunately, this something comes in the form of a previously unknown inheritance granted to her on 26th birthday. But the inheritance comes with a catch, her great-great-great (there’s more great’s but you get the hint) aunt included a clause in the paperwork. Kate can only get what is entitled to her after she publishes seven letters, one each week, to the general public.

But these aren’t just ordinary letters, they’re strict steps to reconnect with the long forgotten (and who knew they existed?) fairies of the Irish folklore. As each week passes, things around her get weird and downright odd as Ireland, and the world at large, start to question the existence of these fairies, and wonder what the final step will reveal. As the public becomes desperate to reconnect with their Irish folklore, Kate begins to learn more about herself, her past and the motivations of those around her.

I was utterly charmed by this novel. (Get it? Alana made a funny :P) Kate McDaid was a lovely main character and I had a ton of fun following the journey of the ‘steps’ along with the other characters in the novel. I’m going to be completely honest and admit that I have a limited knowledge of Irish folklore, but I found the fairy concept in a real life setting incredibly cute although often a tad unrealistic. Then again, not being Irish-born, I have no clue how ingrained this type of folklore is in the culture… So for them this could have been very realistic. Who knows?

Kate’s parents were hysterical. Honestly, their hijinks made the book for me. From going on every kind of talk show to milk their newfound fame to hiring an agent and attempting fake tan… there wasn’t anything they didn’t do. And they that had me smiling to myself or laughing out loud in all of their scenes. Kate’s constant exasperation with them just made it better, I’m sure we can all relate… I know I can.

The magical twist while interesting and unique for such a genre…just didn’t sit well with me. Like Kate in the novel, I was incredibly skeptical about how the ‘fairies’ and these steps suddenly became increasing popular to the point where Kate herself becomes a celebrity. I think I’m just being nitpicky though…Probably because I’m not used to such a magical twist in a chick-lit novel. I’m the girl that will read a book about a cyborg Cinderella but I’m nitpicking at a few fairies? I feel like I’m being a bit of a hypocrite here 😛

I found the friendships in the novel solid… although the romantic sub-plot was a tad unusual, albeit rather cute. I was more inclined to it towards the end… it’s just there was so few interactions or sane interactions… it had a very ‘Pride and Prejudice’ vibe to it. (If that makes any sense at all..)

I will say that the ending was not my favourite. Although I didn’t see it coming, kudos to O’Neill for a rather unpredictable finish, I thought it was rather abrupt and a little bit far-fetched. I closed the book and was left with a WTF kind of feeling… and not really in a good way. This was such a shame because I really did enjoy the book until the last 100 pages, so I was left feeling a little bit let down.

Overall, I did enjoy Reluctantly Charmed for its quirky plot, lovable characters and general ‘fluffy-ness’. This is a perfect light-hearted read for a night in with a glass (or bottle) of wine and a blanket or chocolate (always chocolate). I’d recommend giving it a try even if you aren’t a fan of adult books because this one is definitely not your average chick lit read.

Thank you to Simon & Schuster Australia for providing an ARC in exchange for an honest review.