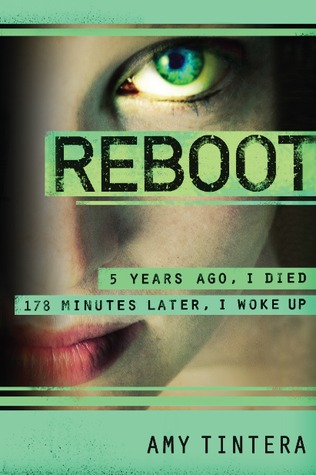 In this post-apocalyptic thriller a deadly virus mutation sees teenagers raised from the dead and trained to be vicious soldiers until Wren, the deadliest Reboot, joins forces with Callum, the most innocent, to try to overthrow the organisation that has corrupted their world.” (Taken from Goodreads)

This was another of those books that I was extremely excited about. I love zombies, but I’m very picky about zombie-related things. (I didn’t exactly like World War Z the movie because it felt like a huge cliche to me). Unfortunately, Reboot fell in the same category as World War Z. Kudos will be given to Tintera for coming up with quite a cool concept, but the execution was lacking. Not only was the plot rather predictable, but the promise of action and explosions was overshadowed by the romance. This novel had so much potential to be amazing and kick-ass, but it ended up being another young-adult romance with other aspects added to it.

Wren 178, is our main protagonist. Having woken up 178 minutes after death, she is meant to be the least human Reboot, with little emotions or a conscience for anything other than following orders. Reboots are branded with the number of minutes it takes them to Reboot, so the lower the number you are, the more human you remain. We are told from the beginning that Wren is meant to be this stoic soldier, but what we see throughout the novel contradicts this. With the arrival of Callum 22, who continues to flirt with Wren (because apparently he’s the only one that doesn’t seem to fear her for no apparent reason), her stoic mentality breaks down bit by bit. In the end, Wren becomes a puddle of sap that I continuously rolled my eyes at.

I never bought into the romance between the two either. I felt it was extremely rushed and lacked any sort of chemistry. The romance aspect tied in with the actual plot of the novel, as it prompted Wren to seek a way out of the Reboot institution, but I felt that using it as the reason she wanted to escape was unnecessary. There could have been an abundance of reasons that Wren could have used to escape, so I was disappointed that a supposedly unemotional Reboot chose the romance route.

I’d also hoped that a more thorough explanation into the beginning of this Reboot epidemic would have been explained throughout the novel. We were given tiny glimpses of it at the beginning before Callum arrived, but it wasn’t enough to form an in-depth understanding of why things were happening the way it was in the novel. I really wanted to know who came up with the virus that wiped out an entire nation, and why did the Reboots simply just start rebooting. And what happened to the rest of the world? Surely it wasn’t just America that was affected. I really doubt that this would be explained in the sequel either, which is quite disappointing. For such a fascinating world, the lack of world-building hinders the ability for this novel to be completely believeable.

There’s not much I can say about the last few chapters of the novel that wouldn’t be considered a spoiler, but I did finally get some action scenes I’ve been waiting for all through the novel! Albeit very short and not as exciting as I had anticipated, it was still there, which was a relief.

I’m unsure as to whether I would continue to read this series as it just didn’t appeal to me at all. I know many others who’ve read and loved it, so that might be you. But in my case, there just seemed to be too many inconsistencies within the novel that I couldn’t overlook. It was a cool concept, but the execution brought down the whole story.