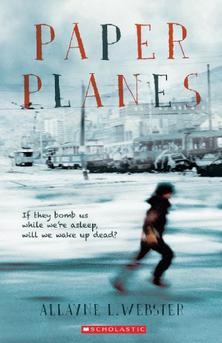 Synopsis: Niko and his family are trapped in Sarajevo during the Bosnian War. The siege lasts for three years and Niko’s family struggle to find enough food and avoid the snipers whose targets are civilians in the streets. Niko and his friend Nadim take refuge from the bombing in the stairwell of their apartment building and together they find hope in the midst of a war they did not start but must try to survive. (Taken from Goodreads)

I’m going to start this review by saying that this book is intended for younger children. Given the intended target audience, I think it does a pretty good job at tackling difficult issues and themes for a younger readership.

The story follows Niko, a 12-year-old boy who is trapped with his family in their hometown during the Bosnian War. As conditions get worse in the surrounding town and his siblings are commissioned for military duty, the family have to decide whether it’s worth taking the risk to leave their war-torn home. And if they do leave, where will they go?

I found myself enjoying this novel more than I thought I would. I was left gripping the seat on multiple occasions wondering what the next threat would be for Niko’s family, and if they would survive.

I do have to say that I feel like this novel glossed over some important themes or storylines that very well could have been dealt with. Perhaps this omission was because of the rather short length overall of the novel, or maybe it had something to do with the younger demographic this novel targets. However, I feel like such omissions really draw away from the overall plot and give it a far shallower feel as a novel that supposedly deals with historical occurrences (given it is fiction and a kid’s book I should probably stop being so nitpicky :P)

I also felt that there was perhaps a general naivety to the characters as a whole. I hadn’t decided if this was a good thing or bad thing though… It’s hard reviewing a kid’s book as someone who isn’t really a kid anymore. And in hindsight, it is probably not a major issue for a book that mostly children will read.

I did really like the fact that it focused on a real war that actually happened. I feel like so many of these types of books (especially for kids) create their own worlds with fake wars. But I really like that Webster chose to focus on a war that actually happened (and I presume had some kind of experience or connection to), and any child reading it can go look up the war or ask more information if they wish (educational AND fictional.. it’s a win win in my book).

Overall, I think it’s a great book to give younger children. As an older reader reading it, it was an okay read (which is an improvement on the last couple of books I read) but I wouldn’t ACTIVELY go and seek this out. I would recommend it as a gift if you have younger siblings, nieces and nephews and kids.. I’m sure they’d enjoy it!

Thanks to Scholastic Australia for providing a physical copy for an honest review.