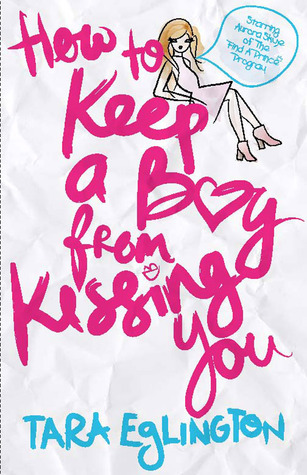 Title: How to Keep a Boy from Kissing You

Synopsis: “Executor of the Find a Prince Program™ and future author, sixteen-year-old Aurora Skye is dedicated to helping others navigate the minefield that is teenage dating. Counsellor-in-residence at home, where her post-divorce ad-agency father has transformed into a NAD (New Age Dad) intent on stripping his life bare of ‘the illusionary’ (i.e. the removal of home furnishings to the point where all after-hours work must be done in lotus position on a hemp cushion) Aurora literally lives and breathes Self-Help.

When the beginning of the school year heralds the arrival of two Potential Princes™ who seem perfect for her best friends Cassie (lighthouse beacon for emotionally fragile boys suffering from traumatic breakups) and Jelena (eye-catching, elegant and intent on implementing systems of serfdom at their school) it seems as if Aurora’s fast on her way to becoming the next Dr Phil.

As Aurora discovers, however, Self-Help is far from simple. Aurora’s mother arrives home from her extended ‘holiday’ (four years solo in Spain following the infamous ‘Answering Machine Incident’) throwing the NAD into further existential crisis. With Valentine’s Day drawing closer and the new Potential Princes not stepping up to the mark, Aurora is literally forced to take to the stage to throw two couples together. However, being cast opposite Hayden Paris (boy next door and bane-of-Aurora’s life) in the school production of Much Ado about Nothing brings challenges of its own. Not only does Hayden doubt that Cupid is understaffed and thus in dire need of Aurora’s help, but playing Beatrice to his Benedict throws her carefully preserved first kiss for a Prince into jeopardy. As Aurora races to save love’s first kiss and put a stop to the NAD’s increasingly intimate relationship with her Interpretive dance teacher (guilty of putting Aurora on detention for a ‘black aura’) she is left wondering who can a self help guru turn to for help? Can she practice what she preaches? And can long-assumed frogs become Potential Princes?” (Taken from Goodreads)

As I’m still quite sick and refusing to move around much, I needed a light and romantic read to lift my spirits over the weekend. I actually received this eARC off Netgalley at the beginning of the year, but have only managed to get around to it. So sorry to the publishers for that! How to Keep a Boy from Kissing You (or Kissing You as I’ll now refer to it because boy, what a mouthful!), was definitely the pick-me-up book I needed as a weekend read. It’s been three years since I graduated high school, but I still remember the fun I had during my time there. This book reminded me of all the memories of high school that I still hold dear to me, and brought along some nostalgia as I laid in bed reading and giggling along to Aurora’s escapades.

As a fellow Aussie, I was so excited to read a book that was set in the my backyard. Aurora and her friends are 16-year-old high school students that have a little bit of an obsession with each others love lives. Especially Aurora, whose Disney princess dream is to find her prince charming. She’s been saving her first kiss for him, which I found to be really cute. At 16, I felt it was definitely acceptable to have such aspirations because she was still rather young. However, there were times when Aurora and her friends’ ages felt a little off – I didn’t like that Eglington felt the need for them to rock up to school in heels and fancy clothes. For those that do not know, Australian high schools have enforced uniform codes. I didn’t think it was necessary to Americanise the story in order to appeal to a wider audience.

Aurora herself was not exactly a favourite character of mine. There were many, many times when her action grated on my nerves or I felt she whinged a little too much. Poor Mr Peterson, the drama teacher, who had to deal with such a rowdy bunch of teenagers as he directed the school play. Aurora and her friends certainly didn’t help with all their interjections and dramatics. I also had problems with Aurora’s friend Jelena. I’m not sure I would really like a friend that consistently put you down subtlely, or thought herself to be above everyone else. I failed to see how that was a healthy friendship. I really did root for Sara, the only one that was brave enough to stand up to Jelena and her antics, but even so she seemed to forgive her too easily.

The most fun I had while reading the book was following Aurora on her journey in the play. I would have loved to have seen the play in action in real life, and I felt Eglington did a wonderful job describing it. Aurora’s rocky family life was also another well written aspect within the novel. I liked that she wasn’t perfect, and her reliance on her cats were so cute.

And what can I say about the love interest? OH BOY. If he had existed in my high school life, I would have melted into a puddle of love myself. Even my boyfriend now is not that romantic (how shameful!!), so I was in all kinds of swoon-territory during the final closing pages of the book. All I got to say is: Aurora you lucky thing! Better hold on to Mr Dreamy tightly or you might just find me stealing him from your grasp!

Thank you to HarperCollins Australia for providing an electronic copy of the book in exchange for an honest review.