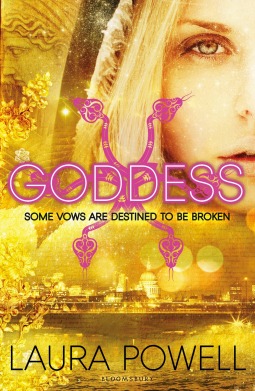 Synopsis: “Strikes. Starvation. Riots. Britain is at breaking-point and Aura is blind to it all. The Cult of Artemis is the only home she’s ever known. Enclosed in its luxury lifestyle, the unrest gripping the country seems to belong to a distant world. Her dream is to serve the Goddess and taking a vow of chastity and obedience seems a small price to pay. But days before Aura is due to be initiated as a Priestess, she meets Aiden, the rebellious son of a cult insider, whose radical ideas and unsettling charm force Aura to question everything – and everyone – she knows.” (Taken from Goodreads)

If I’m being honest, Goddess was a very odd read.

The novel follows Aura, an obedient Handmaiden who is training to become a Priestess of The Cult of Artemis, a cult worshipped widely in modern-day Britain and is renowned for it’s prophecies told by the Goddess. Just as Aura’s about to say her vows and make a life-long commitment of purity and worship, she meets Aidan who enlightens her about the true nature of Britain outside her wealthy confines. As Aura starts to question the legitimacy and motives of the cult, she begins to experience strange premonitions that predict a revolution – and not a good one.

When I first dived into this book, I was intrigued to find out why modern-day England was worshipping an ancient Greek cult – and then I was disappointed when the novel never explained it. It’s like The Hunger Games not explaining why it was split into 12 districts! Seriously. You can’t plonk the reader into this dystopian world and not explain why they began to worship this cult in the first place. I assume that society never stopped worshipping it from ancient Greek times… but it was never outright acknowledged.

Aura’s character growth was well done, albeit a tad rushed. I liked how she went from being this meek and subservient girl to a strong and determined woman. However, one second she’s determined to keep the veil she has to wear over her face, and then in the next few pages it’s gone and she’s fine with wearing makeup in front of a television? I was left very confused.

This confusion seemed to be a running theme throughout the book. Don’t get me wrong, the fast pace writing style definitely made it an addictive read, and one that I devoured in two days. However I think Goddess just dealt with too many themes; corruption, betrayal, politics, possession… And some things I can’t even remember! There was just a lot going on in this novel, and a lot left unanswered. Sure we got closure for Aura and the other characters… but there wasn’t really closure on the bigger picture, which I found annoying for a stand-alone book. I guess you can’t always get closure in every book though!

Overall this was a disappointing read, I just couldn’t wrap my head around the storyline and it really ruined my overall reading experience. I would definitely read another one of Powell’s book though because I did like her writing style.

Thank you to Bloomsbury Australia for providing a copy in exchange for an honest review.