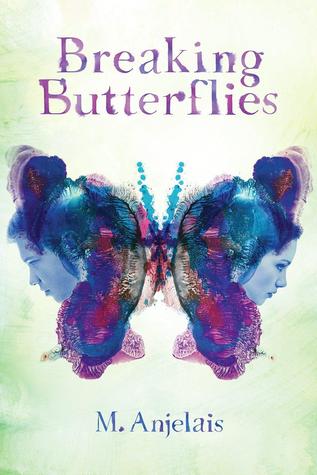 Synopsis: The closest he will ever come to happiness is when he’s hurting her. Will she let him? A beautiful and twisted story of first love and innocence lost–written when the author was just eighteen.

Sphinxie and Cadence. Promised to each other in childhood. Drawn together again as teens. Sphinxie is sweet, compassionate, and plain. Cadence is brilliant, charismatic. Damaged. And diseased. When they were kids, he scarred her with a knife. Now, as his illness progresses, he becomes increasingly demanding. She wants to be loyal–but fears for her life. Only the ultimate sacrifice will give this love an ending. (Taken from Goodreads)

I’ve gotta say.. I’m not having the best luck with some books at the moment. Every book I’ve been reading lately, I’ve been really disappointed with. Unfortunately, Breaking Butterflies is no exception.

Breaking Butterflies follows the complicated relationship of Sphinxie and Cadence, destined to be together (thanks to their Mum’s childhood pact) before they were even in their mother’s bellies. However, as Sphinxie and Cadence grow older, it’s clear that Cadence isn’t quite normal and when he slices Sphinxie with a knife, they’re torn apart. Fast forward to present day and Cadence (who now lives in England with his Mum) has been diagnosed with terminal Leukaemia and wishes to see Sphinxie one more time before he dies. Will she give in?

From the get-go the novel focuses on Sphinxie and her downright creepy relationship with Cadence (her Mum’s best friends son). Seriously this whole book gave me the creeps in a bad way. I could not condone any of Cadence’s behaviour and Sphinxie’s weird dependency on him. It was WEIRD. Seriously weird (I know I’m saying weird a lot… but I just can’t think of another word to describe it).

Although you come to understand why Cadence acts the way he does… there were just some things that shouldn’t have happened and I found myself just feeling really frustrated with Sphinxie and the rest of the characters.

I just couldn’t get past the whole co-dependency situation and I just really felt uncomfortable reading quite a few scenes. I hope I don’t come off as insensitive given the nature of the book and the themes it addresses… but I really just couldn’t like this book.

I feel like perhaps these issues could have been addressed better… in a less creepy relationship way. I just felt in some instances that the characters ignored the more abusive tendencies because Cadence has mental health problems and was dying… and that really didn’t sit right with me. I have to give my kudos to the author though, I understand how difficult these issues are to address, especially in a YA novel.

Maybe it’s a personal thing… but I don’t think in any instance that kind of behaviour should just be pushed aside and not dealt with, even if a character is dying. Bullying or abusive behaviour is intolerable and NEVER okay.

I feel like the author tried to tell too many things, and dealt with too many issues at once that it just didn’t flow or GO anywhere. Maybe if less things were focused on, the ending and subsequent twist with Cadence and Sphinxie would have had more impact.

Overall, I just really didn’t like this book and I’m sorry to say that this was perhaps my least favourite read of 2014.

Thanks to Scholastic Australia for providing a physical copy for an honest review.