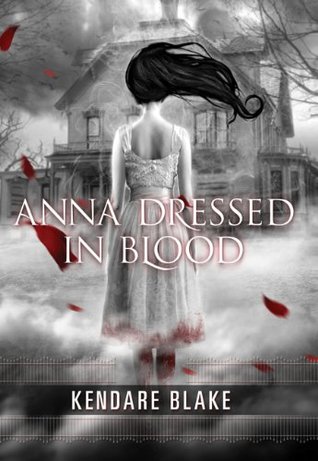 Synopsis: “Cas Lowood has inherited an unusual vocation: He kills the dead.

So did his father before him, until he was gruesomely murdered by a ghost he sought to kill. Now, armed with his father’s mysterious and deadly athame, Cas travels the country with his kitchen-witch mother and their spirit-sniffing cat. They follow legends and local lore, destroy the murderous dead, and keep pesky things like the future and friends at bay.

Searching for a ghost the locals call Anna Dressed in Blood, Cas expects the usual: track, hunt, kill. What he finds instead is a girl entangled in curses and rage, a ghost like he’s never faced before. She still wears the dress she wore on the day of her brutal murder in 1958: once white, now stained red and dripping with blood. Since her death, Anna has killed any and every person who has dared to step into the deserted Victorian she used to call home.

Yet she spares Cas’s life.” (Taken from Goodreads)

Anna Dress in Blood was a very confusing read for me. I was extremely excited to finally have a copy of the book, and couldn’t wait to delve into it. Reading through my friends’ reviews on Goodreads, I found that a majority thought the book was do-not-read-it-at-night scary. After going through those reviews, I was basically rubbing my hands together in giddiness, ready to be scared. Unfortunately, that did not happen, not even once.

I’ve read the reviews that compare it to Supernatural, and as an avid fan that’s still invested in the show even though it sucks right now, I can say that there are points in the story that seem like a big ripoff. But I’ll get to that later.

The novel starts off with Cas hunting a hitchhiker ghost (Supernatural ripoff #1). Obviously he manages to kill it without much of a hitch and returns home to his mum, ready to pack up and leave for a new job in Canada – to kill the ghost everyone refers to as Anna dressed in blood. Cas manages to piss off some popular kids on his mission to figure out the Anna mystery, and they take him to Anna’s house for a scare. Little did they realise, Anna would appear. And even though she wants to kill everyone that steps into her house, she manages to spare Cas for some reason that is never explained. This makes no sense at all because Anna knows Cas is there to send her away. But of course she spares the one person that can get rid of her. I’m not annoyed that she spares Cas, but I am annoyed by the fact that her reasoning for it is unexplainable. Instead, she kills the evil kid that knocked Cas unconscious, and left him in the house, instead.

Instead of being grateful for his life, Cas finds Anna (a creepy grudge girl lookalike) to be an enigma. A mystery to solve. From the get-go, you can tell that Cas was never going to get rid of Anna. His obsession leads him to trying to solve her murder, pissing a lot of people off in the process. To be quite frank, I would have been pissed off as well if I was Will, the friend of the dead bully that knocked Cas unconscious. All Will wanted was to get rid of the ghost that killed his friend, a desire that was understandable and filled with common sense. Cas’s stubbornness for no good reason pisses Will off, because he can’t seem to fathom why anyone would want to let the ghost live. (I know plot wise Anna had to live, but being in Cas’s head was a pain in the ass because he’s a kid that thinks only his word goes for everything.)

Cas and Anna’s relationship is completely ridiculous to say the least. He literally wakes up one day and says, ‘Oh, I think I like her. What is this weird feeling? Why do I feel the need to protect a ghost that’s brutally murdered hundreds of innocents’. It is never explained why he begins to have these feelings either. And why does Blake never explain how Anna manages to control herself around Cas, and has the ability to show her true (un-grudge-like) self for him only. There are just so many questions that remain unanswered.

While I really disliked Cas, Anna was quite an interesting character I enjoyed reading about. The most interesting part of the book would have to be the reveal of her past, and finally understanding how she died. It was a heart-wrenching story of her past, and very emotional. But it still doesn’t explain how SHE starts to return these romantic feelings for Cas. She’s a ghost for god’s sake!

In terms of similarities between Anna Dressed in Blood and Supernatural, there are many! The athame that Cas uses to get rid of ghosts is very similar to the angel blade carried by the Winchester boys (#2). Gideon, a grandfatherly figure that seems to have all the answers is just like Bobby, the fatherly hunter that the Winchesters call whenever they’re in trouble (#3). Anna’s story sounds like the Bloody-Mary episode in season 1 where the boys are hunting a ghost that kills people within her house (#4). The name Cas is short for Castiel the angel in Supernatural (#5). I’m sure there may or may not be more similarities, but the ones I’ve listed already seem like a lot.

Overall, I was not impressed with this novel in its entirety. It was interesting while I read it, but having time to think about the novel as a whole, there are many gaps within the story that I wish could have been filled. I did not like Cas as a person, I can’t seem to fathom his relationship with Anna, and some of his actions are quite selfish. I really looked forward to reading this book, but unfortunately it was a disappointment.

A lot of people do love this story however, so who know, you may too!

Thank you to TheReadingRoom Australia for providing me with a copy in exchange for an honest review.