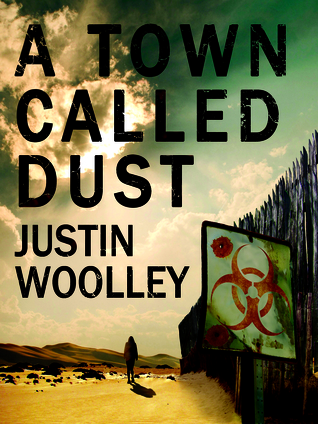 Synopsis: ““Stranded in the desert, the last of mankind is kept safe by a large border fence … Until the fence falls. Squid is a young orphan living under the oppressive rule of his uncle in the outskirts of the Territory. Lynn is a headstrong girl with an influential father who has spent her entire life within the walled city of Alice. When the border fence is breached, the Territory is invaded by the largest horde of undead ghouls seen in two hundred years. Squid is soon conscripted into the Diggers—the armed forces of the Territory. And after Lynn finds herself at odds with the Territory’s powerful church, she too escapes to join the Diggers. Together Squid and Lynn form an unlikely friendship as they march to battle against the ghouls. Their journey will take them further than they ever imagined, leading them closer to discovering secrets about themselves, their world, and a conspiracy that may spell the end of the Territory as they know it.”” (Taken from Goodreads)

When I started reading this book I wasn’t really sure if I it was my cup of tea, but as I got into it I was pleasantly surprised and managed to finish it relatively quickly. While there are some similarities to current dystopian series, there’s something about this novel that screams potential for a unique take on the genre.

A Town Called Dust opens into an apocalyptic setting where most of the world is hot and barren and overrun with ‘ghouls’, zombie-like creatures that are kept out of the Territory by a large surrounding fence. The army, or Diggers as they are called are situated in what used to be Uluru, and are not trained to uphold the rights and safety of the citizens but are instead solely focused on defeating the ghouls that threaten their borders. The Territory is run by the Administrator, a man bent on making a name for himself in the history books but also by the Church, controlled by High Priestess Patricia who is hell-bent on taking control of the Territory to exterminate all those who are ‘impure’.

The story focuses specifically on the dual perspective of characters Squid and Lynn with occasional bursts of perspective from Lynn’s foster brother Melbourne. Squid is an orphan who works on his uncle’s dirt farm in the city of Dust and longs to go back to school and study Mathematics.

Lynn is the daughter of Colonel Hermannsburg, a high-ranking official of the Diggers in the city of Alice (similar to the Capitol in The Hunger Games). When tragedy strikes and Lynn is forced into the Sisters of the Church, she takes drastic measures to live up to her family’s reputation and her desire to be a Digger.

When the two meet they form a tight bond as they battle through harsh training and the impending threat of a ghoulish invasion.

Although a little slow at the beginning, the novel picks up pace about halfway through when Squid meets Lynn. However, A Town Called Dust felt very much like an introduction. While not an epic novel, I can see it becoming a fantastic series as Woolley did an incredible job at creating an interesting world to be further explored in future novels.

Unlike most novels with boy and girl protagonists, the lack of romantic plot is refreshing although I can see potential for a romantic sub-plot down the line. Either way, both protagonists complement each other and in some ways their roles are reversed, which I thought was very clever of Woolley. I love how Lynn clearly subverts and willingly rejects her ‘traditional’ role in society.

Numerous people tell her that her place in the Territory is to be a subservient Sister of the Holy Church, but to every one of those people she pretty much says screw you. I think Lynn is a perfect example of a well written strong female character, one whose stubbornness and perseverance really makes the novel. And even though the focus is clearly on Squid, Lynn really stood out for me. Squid can be seen as the literal weaker character – more intelligence than brawn. While I didn’t connect on the same level to Squid as I did Lynn (it may have something to do with his name… not that much of a fan of ‘Squid’), I can see potential for great character development in the future.

If I could compare it to anything I’d describe it as a cross between Mulan and The Maze Runner – who knew such a thing could exist?

A Town Called Dust is a promising debut novel for a series that shows immense potential to be the next Maze Runner. I’d definitely recommend this to anyone who is a fan of apocalyptic/dystopian young adult fiction or The Walking Dead. While I did enjoy reading this book, I unfortunately didn’t LOVE it. However I’ll be eagerly awaiting book two, it’s safe to say I’m intrigued to see what trials Lynn and Squid have to face next.

Thank you so much to Pan Macmillan Australia for providing a copy in exchange for an honest review.