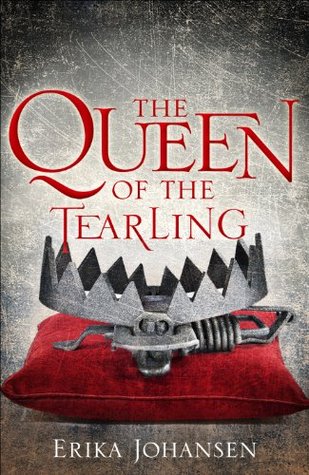 Synopsis: “Kelsea Glynn is the sole heir to the throne of Tearling but has been raised in secret by foster parents after her mother – Queen Elyssa, as vain as she was stupid – was murdered for ruining her kingdom. For 18 years, the Tearling has been ruled by Kelsea’s uncle in the role of Regent however he is but the debauched puppet of the Red Queen, the sorceress-tyrant of neighbouring realm of Mortmesme. On Kelsea’s 19th birthday, the tattered remnants of her mother’s guard – each pledged to defend the queen to the death – arrive to bring this most un-regal young woman out of hiding…

And so begins her journey back to her kingdom’s heart, to claim the throne, earn the loyalty of her people, overturn her mother’s legacy and redeem the Tearling from the forces of corruption and dark magic that are threatening to destroy it. But Kelsea’s story is not just about her learning the true nature of her inheritance – it’s about a heroine who must learn to acknowledge and live with the realities of coming of age in all its insecurities and attractions, alongside the ethical dilemmas of ruling justly and fairly while simply trying to stay alive…” (Taken from Netgalley)

The Queen of the Tearling has been a much anticipated book of 2014. With such early praise and its comparisons to The Hunger Games’ narrative drive and Game of Thrones’ depth of characters, I knew this was a book I needed to check out asap. While I think the comparisons aren’t entirely on the mark, the novel did end up being a very good read.

This novels’ background history is very confusing, and for readers that dive into the book without any knowledge of how this book is set, then I think you’ll get really confused. This world came about following ‘The Crossing’, where people from our present crossed the seas into new land. The story is set in our future, but this future has regressed backwards into a medieval setting.

Confusing, right? It takes a little while to get used to this medieval setting with incorporations like modern medicine, but I thought it was an extremely cool concept. However, it was explained that during The Crossing, a whole ship was lost with all the technology it held on board. This ship apparently held all the medical equipment and staff…which makes no sense because who in their right minds would keep such priceless equipment and knowledge contained on one vessel. Because of this tragedy, the world of the Tearling regressed backwards, having lost most of their scientific and medical knowledge.

The novel opens up with Kelsea Glynn, the heir to the Tearling throne who’s been in hiding all her life. As she turns 19, a band of her deceased mothers’ knights come to fetch her to reinstall her on the throne. A throne that was reigned by her uncle in the role of Regent. I found Kelsea to be a very compelling character. She was extremely naive in the beginning, having known nothing but her foster parents and the lessons they bestilled on her. Therefore as she makes the journey back to her kingdom, she feels like she has a lot to prove, to show that she can be their Queen.

Kelsea has an extremely strong-will, which I deeply admired. She doesn’t back away from a challenge and is not afraid to take charge when necessary. Although she’s never communicated with others beside her foster parents, she manages to quickly grasp onto the social behaviours expected of a Queen. While this transition was definitely abrupt, it doesn’t deter you from the story at all. I was so busy rooting for Kelsea that it didn’t even bother me when she suddenly turned badass overnight.

Aside from Kelsea, the story is told from a few POVs, including her regent uncle and the sorceress-tyrant from the neighbouring realm, Mortmesme. Kelsea discovers upon arrival at her castle that her mother had signed a treaty with the Mortmesme Queen offering people in exchange for peace. Learning this, the pedestal that Kelsea had put her mother upon suddenly collapses as she realises that her mother was never a good Queen. And she did not want to be like that.

The general plot of the story follows Kelsea as she grows into her role and tries to save her realm from the evil influence of the Mortmesme Queen. It was fast paced and kept me on my toes with mystery and intrigue, especially as Kelsea’s life was being threatened at every corner. As she slowly learns the ropes to her powerful position, Kelsea slowly grows from the naive girl that worried about her appearance, to a Queen that wanted to rule justly.

I really enjoyed this novel, but it’s not without its flaws either. However, I’m now hooked onto this world created by debut author Johansen, and can’t wait to read more on it. I wouldn’t call it high fantasy, but it has enough fantasy elements that will surely excite fantasy lovers. I’m looking forward to the next book, and the film!

Thank you to Random House Australia for providing an eARC in exchange for an honest review.