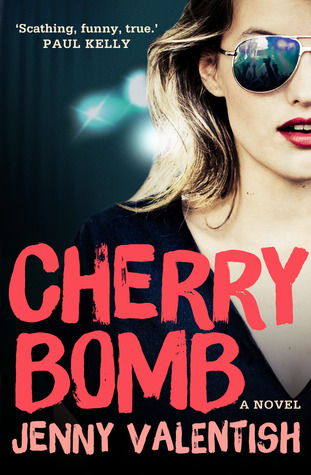 Synopsis: “Nina Dall is one half of Sydney pop-punk band The Dolls. Have they got what it takes to stay on top or are they just a one hit wonder? Told through the eyes of a young singer who’s seen it all, this is celebrated rock journalist Jenny Valentish’s debut novel – a wild ride into Australia’s music scene.

Nina Dall has seen it all by her twenty-first birthday, including her own meteoric rise to fame and its inevitable aftermath. She created teen band The Dolls to escape suburban hell. Now she needs to prove she’s not a one-hit wonder and convince veteran producer John Villiers to be her own personal svengali. But he’s got his own problems.  Rose Dall craves adoration, and through The Dolls, she gets it. But with the band’s every move coming under media scrutiny and cousin Nina going off the rails, she’s pushed to breaking point. Can The Dolls survive each other?  Alannah Dall had a pop career in the 1980s before disappearing from public view. She’s resurfaced to steer her nieces away from the same scandals, but with her own comeback on the cards, The Dolls start to become a threat.  A mesmerising ride into the heart of love, fame and rock’n’roll. You have to risk everything to get to the top-and even more to stay there. But how do you get back what’s been lost along the way? Cherry Bomb is a brilliant debut novel that will grab you tight and never let you go.” (Taken from Allen & Unwin)

Cherry Bomb, music journalist Jenny Valentish’s debut novel, follows cousins Nina and Rose Dall on their journey from lowly Western Suburbs teenagers to edgy rock stars in their pop-punk band, The Dolls. Mentored by their ‘has-been’ 80’s icon Aunt Alannah Dall, the two are determined to carve a name for themselves in the music industry leaving havoc and heartbreak in their wake. The novel explores the familiar themes of sex, drugs and rock and roll, and delves into the nit and gritty of the Australian music industry where scandal and exploits run riot. Juggling sexy but untouchable producers, skeezy managers and manipulating record companies the girls struggle to remain true to their music and themselves as the web of deceit, lies and betrayal thickens. Will they continue to rise to fame and fortune or will their rocky relationship and underlying problems lead to a permanent downward spiral?

Okay, I’m going to be honest here and admit that I didn’t enjoy this book as much as I wished I could have.

It was slow starting and often disjointed in the way it jumped from one scene to another and I found it quite difficult to identify the timeline it followed.

Neither the narrator Nina Dall nor her cousin Rose Dall were terribly likeable. In fact, none of the characters were and I think that was a real let down. This did however add to the realism of the novel as of course in life, and ESPECIALLY the music industry, no person is completely perfect or likeable, but, and I don’t know if it’s just me, I really can’t enjoy a book if not one of the characters is likeable. I think such a complex and issue riddled character can still be written in a way that makes a reader like them or want to root for them, but in this case I just didn’t feel that.

Everything about Nina Dall irked me. She was so self-absorbed with her own problems that I often found myself getting annoyed with her. I did admire her unpredictability and her ‘I don’t care what you think’ attitude, something I definitely wish I had, but that did not make up for her mean-spirited and silly antics.

Slowly her story does unravel throughout the novel and you understand why she acts the way she does but still, I felt bad that I couldn’t sympathise with her. And boy did I want to! But her many ridiculous and downright selfish decisions just far outweighed the underlying issues she was dealing with. (I hope that doesn’t make me a bad person for saying that)

And her cousin Rose, although a touch more likeable than Nina at the beginning of the novel, just became way too self-centered and silly. I mean the fact that she could be so obtuse and blind to some of the things Nina was going through was just ridiculous. I can however understand what it’s like to be close to someone that’s going through a rough time, especially when you don’t know how to react without making things worse… but everything this girl did just irked me more. Basically this book was just a whole lot of me being irritated with Nina and Rose 😛

I will however give props to Jenny Valentish for the realism of the characters and the overall storyline. There’s no way you could describe either of the main girls bland or boring, far from it in fact and I really admire her decision to portray these characters in a no holds bared kind of way. Once I eventually got into the novel I understood better the fast paced decision, obviously likened to the often fast-paced rise of a band to fame and I did like the occasional bursts of Nina Dall’s ‘Inner Critic’ that had me confused when I initially started the novel.

I definitely love the way Valentish took a potentially clichéd concept and gave it a fresh and gritty spin, I’ve not yet read a fictional book based in the music industry as real as this one. I definitely think her music journalist background paid off in adding to the authenticity of the story and providing an outlook that only someone in the music industry would know.

Overall I was left pretty disappointed with this novel. I had such high hopes because the premise sounded fantastic and wonderfully edgy, yet as hard as I tried I just couldn’t like it. However, the general consensus around this novel (well, from the reviews I found on Goodreads) was mostly positive, and I can definitely see why many people like it…so maybe it’s just me! I will not rule out reading another book by Jenny Valentish as I definitely appreciated her style of writing.

Thank you to Allen and Unwin Australia for providing a physical copy in exchange for an honest review.