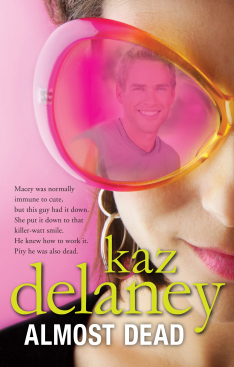 Synopsis: “Macey’s life has been turned upside down. Her mother has left, her father is absent and her two best friends (her brother Seth and his girlfriend Willow) are MIA. On top of that Macey is being visited by ghosts who need her help to ‘move on’. But as wild as all that sounds, it’s all under Macey’s control until a rakish, good-looking spirit called Nick turns up … in her bedroom!

Nick’s a spirit with spirit who insists he’s not dead, he’s astral travelling and has a message for Macey: someone is out to get her. Macey’s biting wit has got her in trouble before, so she’s not surprised but when the threatening notes start turning up, she’s seriously shaken. Does someone want her dead?

It’s all rather disturbing but she’s finding it hard to focus on who could mean her harm with the annoyingly handsome surf god Finn turning up at the most inopportune times and a father with a rather large surprise of his own.

Is it a case of bad timing? Or are these things somehow connected? And if they are, what on earth should she wear when she’s solving the mystery?” (Taken from Goodreads)

Macey seems to have the perfect life, but behind closed doors, it’s a mess. She’s being visited by ghosts that need her help to move on, and with her brother and best friend away on holiday, Macey’s left by herself to try and solve the mystery behind super cute ghost Nick’s astral walking tendencies. With a stalker attempting to scare her, a new family she never knew about and trying to not fall on her face in front of surf god Finn, Macey’s life has completely tipped upside down and it’s up to her to piece together all the connections before her stalker finally manages to harm her.

Almost Dead is set in the backdrop of Australia’s Sunshine Coast. I always feel so proud every time I pick up a new book by a author from Australia because it’s so exciting to read about places you can pinpoint. It does wonder for setting up the scene backdrops! Delaney does a wonderful job in doing justice to the Goldcoast, and I could almost imagine myself being there in person with Macey as she walked along the beach.

Macey to me was a very interesting character. I liked her personality – it was feisty, but because of her no-nonsense personality, she doesn’t have many close friends or anyone to turn to. With her mum running off, her dad halfway across the world working and her brother disappearing on holiday with her best friend, Macey often has the house to herself. Except for the ghosts that visit her. I liked that there was an explanation for Macey’s ability to see ghosts, but it still felt a little rushed and unthorough. However, that doesn’t hinder your enjoyment as her being able to see ghosts is only a small story arc.

After meeting Nick and realising that he is in fact not dead, but astral walking, Macey begins to receive messages from her very own stalker. Nick warns her that he’s there to warn her about someone trying to hurt her, and that the connection has something to do with him. From that point on, the mystery of Macey’s stalker had me hooked from beginning to end – and let me tell you I did not see it coming!

Macey is an extremely smart girl, and I found myself holding my breath every time something creepy happened to her. Delaney’s writing is so realistic you find yourself beside Macey even when you’re not trying to be. The mystery is smartly woven in with the romantic elements of Macey’s life, making me question each and every person she interacted with. Macey has to deal with a lot of drama throughout the novel, which is very smart of Delaney. Her drama acts as different decoys, making you question how everything is connected, but I’m happy to say that the ending has a nice resolution that doesn’t leave you hanging. What a relief!

If I had to nitpick, I would have to say that I didn’t enjoy how Delaney attempted to create a love-triangle between Macey, Finn and Nick. It felt really forced, and didn’t eventually happen but I felt myself inwardly groan every time hints of it occurred. Nick as a whole felt really one-dimensional, and the ghosty element felt a lot like a plot point that was thrown in to attract the paranormal-genre readers. I understand why it was used, but I think the story would have been just as good without Macey’s ability to see ghosts.

At the beginning of the novel, I expected Almost Dead  to be just like Meg Cabot’s ‘The Mediator’ series, but it’s nice to say that I was pleasantly surprised by how different it is. I thoroughly enjoyed this book a lot, and if you like high school mysteries with some glitz and glamour, then definitely pick this one up next year!

Thank you to Allen & Unwin Australia for providing an ARC in exchange for an honest review!